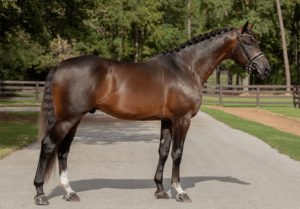 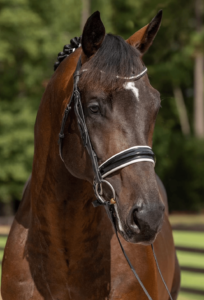 Dark bay 2016 16.3 hand Westphalian stallion by Rotspon out of Acanhada xx by Grave Digger xx. Acanhada xx is a Westphalian Main Mare Book 1 approved. This outstanding mare received 10s on her gaits at inspection, as well as excellent free jumping scores. She has had 4 lovely Westphalian premier offspring, including 2 Oldenberg approved stallions.

This lovely Stallion has consistent winnings with scores in the 70’s. He has shown up to second level and is now schooling third. With consistently scoring 9s on gaits, Radames qualified for the USDF Breeders Championship series in 4-year-old materiale division.

This handsome stallion is an exceptionally powerful and active mover. He has unlimited elasticity and already shows

good carrying power in his hindlegs. His natural uphill movement and his work ethic make him the epitome of the modern dressage horse. Radames is also a preliminarily approved stallion for Oldenburg NA.  In addition to his dressage training, he also goes on trails and hacks in the field. His easy temperament and trainability make him a perfect choice for an open or amateur competitor.

His sire, Rotspon, was awarded Hanoverian Stallion of the Year in 2017. Rotspon is credited with 888 competition progeny with winnings of €680,105 – 767 dressage placegetters with 80 progeny competing at S level. 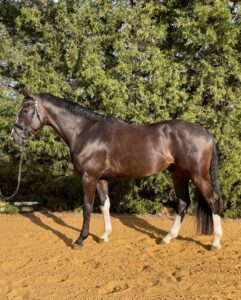 Dark bay 2018 17 hand Westphalian gelding by Rotspon out of Acanhada xx by Grave Digger xx. Acanhada xx is a Westphalian Main Mare Book 1 approved. This outstanding mare received 10s on her gaits at inspection, as well as excellent free jumping scores. She has had 4 lovely Westphalian premier offspring, including 2 Oldenberg approved stallions. Raxus is full brother to NTEC’s stallion Radames. This lovely gelding is consistently scoring in the 70’s at Training Level while also ready to compete in USDF Four-Year-Olds. His quiet temperament and willingness make him a perfect choice for someone wanting their next FEI horse. As a two-year-old, Raxus qualified for the colts/gelding championship with a 75.7%.

His sire, Rotspon, was awarded Hanoverian Stallion of the Year in 2017. Rotspon is credited with 888 competition progeny with winnings of €680,105 – 767 dressage placegetters with 80 progeny competing at S level. 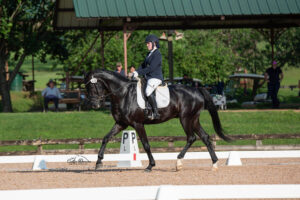 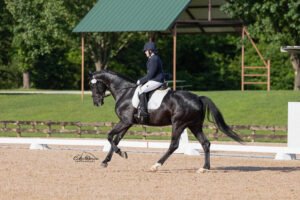 Black 2016 17 hand imported Mecklenburg gelding by Celencio out of Sina. Crescendo’s bloodlines contain many famous lines, such as Vivaldi and Sandro Hit. This gelding has consistently been winning with scores in the 70’s at Second Level and is schooling all third level movements. Crescendo was the 2020 Reserve Champion in the USDF Breeders Championship series in 4-year-old. He has qualified for USDF Nationals with an amateur rider and has won USDF Year-End Awards. Crescendo was the 2021 SWDC Res. Champion in Training AA and First AA. This horse has breathtaking movement and a pedigree of performance success that both amateurs and professionals will be pleased with. He has all the qualities to make a Grand Prix horse and is easy enough to be ridden by anyone.

Chestnut 16.2 hand 2017 imported Mecklenburg gelding by Balou Peggio out of Smilla by Sandrit. This horse shows talent both in dressage and show jumping. He has shown through training level, receiving scores in the 70s. His wonderful ability to jump indicates he is truly a horse for the future, and his royal pedigree including Balou du Rouet, Sandro Hit and Graf Grannus cement his international potential. This young gelding has an exceptional jumping form, carefulness, movement, and rideability. He is an outstanding prospect for the big jumper ring. 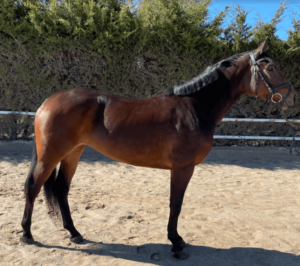 Bay 16 hand 2017 North American Studbook with Holstiner bloodlines mare by Chocking Bleu TSH NA out of Ursula I by Cathalido. She is easy to handle on the ground and he can be groomed, bathed, clipped and stands for the farrier. She loads easily on a trailer and travels well. Ulriche has three uphill, comfortable gaits, and a soft mouth. She has also started over jumps and shows great talent. This horse would be great for a more petite rider wanting to do either dressage or jumping.

Dark bay 16.1 hand 2014 Westphalian mare by Fidertanz out of Daytona Beach by Don Bedo. Fantasia has an extensive pedigree of many accomplished horses including Fidermark, Florestan, and Donnerhall.  Donnerhall won the World Cup European League, as well as being the Oldenburg dressage stallion of the year in 1997 and 1998. Fantasia has 3 supple, elastic, high quality gaits. She has an excellent work ethic and lack of resistance under saddle. She would also make a great low  jumper due to her big scopey jump. She consistently jumps 3’3 courses with both juniors and adults but has the talent to go higher. 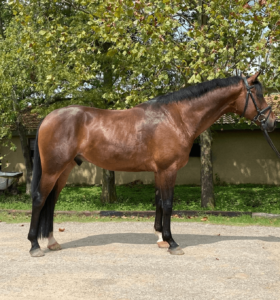 Bay 2016 16.2 hand imported Mecklenburg gelding by For Romance I out of Janera SP by Just Perfect. For Romance I was honored as the VTV Oldenburg Dressage Stallion of the Year 2019 at the Oldenburg Stallion Licensing in Vechta, Germany.
This lovely gelding is a very safe and straightforward ride. He has shown through Second Level and is schooling Third. He qualified for the Festival of Champions as a four-year-old with a score of 8.16 piloted by an amateur rider. Fallstaff was the 2020 USDF Breeders Cup Four-Year-Old Materiale Champion, qualifying with scores over 84%. He even scored 73+% with a junior rider in First Level. He is a true joy to ride and extremely easy, making him perfect for an upcoming junior rider or amateur. This horse could also have a successful hunter career due to his beautiful jumping form. He also has easy clean changes both directions. With his natural uphill balance and swing through his back, this lovely horse will be sure to make a super FEI prospect.